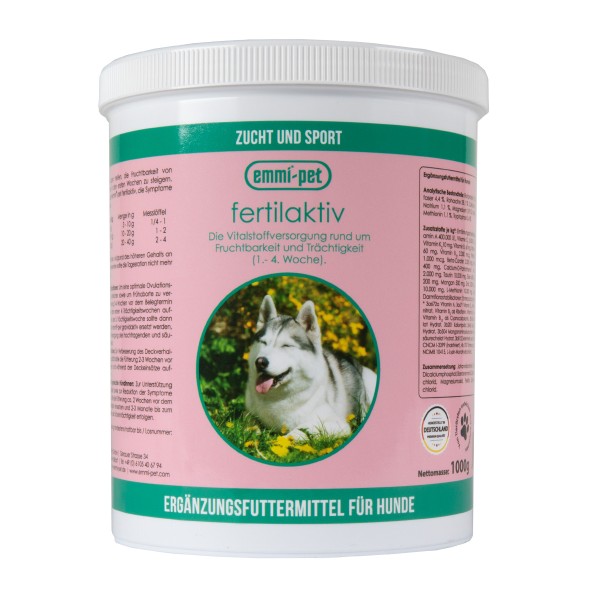 Prices incl. VAT plus shipping costs Depending on the delivery address, the VAT may vary at checkout.

emmi®-pet fertilactive contains biologically high-quality vitamins, minerals, trace elements and amino acids, which serve to harmonize and optimize the fertility process in breeding bitches and stud dogs, as well as to maintain pregnancy during the first weeks. In addition, they regulate the heat in uncovered bitches and reduce the symptoms of false pregnancy.

An ideal supply of the breeding male and female is extremely important to the dog owner. In addition to good basic feed, high-quality vital substances in particular play a central role here. These have an influence on the sperm quality of the male dog and help the bitch during the so-called "heat" to obtain ideal conditions for a successful reception. Especially during the first weeks of pregnancy the risk of abortion is high. A wide variety of external influences can impair the healthy maturation of the fetuses. The special supply of the dog with vitamins, trace elements and amino acids should be given attention here. For a successful gestation period and healthy breeding males is therefore emmi®-pet fertilactive the right supplement. From the 5th week of pregnancy we recommend emmi®-pet gravidactive.

The optimal supply of Vitamins, minerals, trace elements and amino acids plays a key role in the fertility process of the dog. These nutrients and vital substances stimulate hormone synthesis and cause the best possible preparation of the reproductive organs. The result is dogs that are eager to mate and ready for conception with vital, fertilizable eggs or sperm, which is the best prerequisite for the greatest possible number of strong and healthy puppies. Since bitches are particularly sensitive to vitamin and trace element deficiencies during the first three weeks of pregnancy, only an adequate supply of these vital substances will protect the embryos from malformation and early abortion.

However, many uncovered bitches also enter a stage of false pregnancy 4 to 9 weeks after heat, usually lasting 2 to 3 weeks, with swelling of the mammary gland, milk flow and changes in character. A sufficient supply of vitamins, minerals, trace elements and amino acids is also the optimal prerequisite for a rapid normalization of this hormonal process.

Biologically high-quality vitamins, minerals, trace elements and amino acids serve to harmonize the fertility process in breeding bitches and breeding males and to maintain pregnancy during the first weeks. In addition, it regulates the heat in uncovered bitches and reduces the symptoms of false pregnancy.

Breeding bitches: To achieve optimal ovulation and conception rates, as well as to prevent premature abortions, feeding should begin 3-4 weeks prior to the breeding date and be maintained during the first 4 weeks of gestation. Then, from the 5th week of gestation onwards emmi®-pet fertilactive through emmi®-pet gravidactive which provides optimal care for the pregnant and lactating dam.

Breeding males: To improve mating behavior and semen quality, feeding should begin 2-3 weeks prior to a mating and be maintained during mating operations. 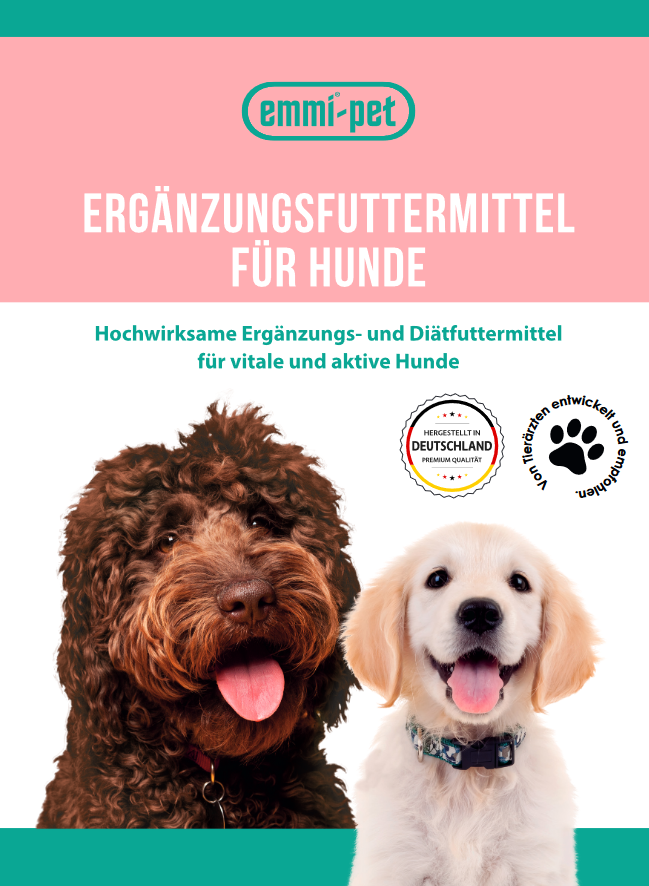 We use cookies. Some of them are technically necessary (for example for the shopping cart), others help us improve our website and to offer you a better user experience. To our privacy and data protection. To our imprint.

You accept the following cookies by clicking on Accept all. You will find further information in the privacy settings, where you can also change your selection at any time. Just go to the page with the privacy policy.